As a kid growing up in the eastern United States, I watched Mr. Rogers’ Neighbourhood religiously each afternoon. If you’re a Canadian or an American born anytime between the late 60s and the mid 90s, admit it, you’re right at this moment singing the theme song inside your head. Every day, Mr. Rogers sang to us, inviting us to become his neighbours.

Well really, who wouldn’t want Mr. Rogers as a neighbour? He seemed like the kind of guy you’d be happy to have round for a barbecue, a guy who’d mow your front lawn for you “because I had the mower out and was doing mine anyway”, a guy who’d even pop over to shoot hoops with you in your driveway from time to time. And if you were in a tight spot, Mr. Rogers would be sure to roll up his sleeves and help you out. An all-round excellent neighbour.

And Your Neighbour as Yourself

The Gospel of Luke relays a now famous conversation between Jesus and a Jewish legal expert, which turned to the subject of neighbours (Luke 10:25-37). The lawyer begins by asking Jesus what he needs to do to inherit eternal life¹. Their discussion proceeds like this:

[Jesus] said to him, ‘What is written in the law? What do you read there?’

And [Jesus] said to him, ‘You have given the right answer; do this, and you will live.’

Yeah, this guy knows his law – it was pretty rare for a scribe such as him to get a thumbs-up from Jesus on a Torah-related question. But something about his own answer, about loving his neighbour as himself, unsettles him and in typical lawyer fashion, he looks for a loophole. He asks, “And who is my neighbour?” Of course! If he can narrow the qualifications for a true ‘neighbour’, he might be able to limit the number of people he actually needs to love.

A (Too) Familiar Parable

Jesus responds with the parable we now call ‘The Good Samaritan’. We know it well. In fact, we know it so well, we can easily miss its cultural depth, the wry and clever plot twists Jesus inserts and the radical demand he makes of us through the story.

In the parable, Jesus tells of a man (presumably Jewish) travelling on the road from Jerusalem to Jericho. Caves along this road served as excellent hiding places for all manner of unsavoury characters and violent men; the stretch of road had even become known as ‘The Way of Blood’. And sure enough, the man in the parable is attacked, stripped and left for dead by a gang of robbers.

Along come a priest and a Levite (someone with an official function at the Jerusalem temple), but instead of assisting him, they both pass by on the far side of the road. It’s not just because they’re callous. As implied by their positions, they’re likely making their way to Jerusalem to serve in the temple. Now, if the man lying in the road happens to be dead, they would be rendered ritually unclean by touching him and disqualified from fulfilling their temple duties. They’ve probably waited a long time for the honour of temple service to fall to them. So, they allow ‘service to God’, and perhaps personal prestige, to stand in the way of the immediate needs of their neighbour. 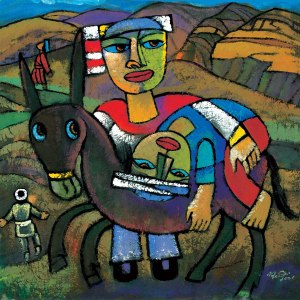 Now, Jesus really turns the screw. The hero of his story turns out to be…a Samaritan! That doesn’t mean much to us in the 21st-century West, but ‘good Jews’ in 1st-century Palestine detested Samaritans. In their view, foreign invaders and tax collectors sat at the bottom of the proverbial ash heap. Then, there was 30 metres of shit and under that were Samaritans. Jews considered them a polluted race of half-breeds, with a corrupt hybrid religion (for more of an explanation, see below²).

So imagine the legal expert’s surprise when, in Jesus’s parable, it’s a Samaritan who treats the wounded man’s injuries, carries the man on his own donkey to an inn and cares for him until the next day. In doing so, the Samaritan sets aside his own timetable and agenda, whatever the purpose of his journey might have been. He even pays the innkeeper to look after the injured man, offering to incur any additional costs upon his return trip.

“Which of these three seems to you to have been a neighbour to the man assaulted by robbers?” Jesus asks. Notice that the legal expert can’t even bring himself to say, “The Samaritan”. He settles instead for, “The one who had mercy on him.”³

Who would play the hero? Jesus might make change the hero to suit the audience, but we can be certain that he would choose a protagonist that best reflected our idea of the ‘other’, the ‘outsider’, the ‘enemy’, or the ‘dangerous stranger’. The Muslim. The refugee. The illegal immigrant. The lesbian, or the gay man. The Russian, or North Korean official. The liberal. The fundamentalist. The member of the Clinton family, or the Trump family.

Go and Do the Same

No doubt the story would still be hard to swallow, as would his follow-up statement: “Go and act in the same manner.”

Through Jesus’s parable, we too face the choice between what’s right and what’s easy. Assisting our friends and others in our safe, comfortable and familiar communities is often taxing enough. Yet Jesus asks us to be neighbours to those outside our communities, to those we don’t particularly want to associate with, to those we distrust, or even fear.

How do we respond? Do we claim to be too burdened ourselves to help others? Do we accept the cultural narrative that says people should be perpetually self-reliant and that we shouldn’t ‘create dependency’? Do we use anxiety over our own safety (or even, cleverly, the safety of our ‘closest neighbours’) to deny assistance to strangers? Do we make the excuse that “we can’t help everyone”, so that we don’t have to help anyone?

Or do we set those fears and excuses aside and honour Jesus’s call to “go and act in the same way”?

¹ This question does not mean “How do I go to heaven when I die?” The Jewish understanding of ‘inheriting eternal life’ was entry into the Kingdom of God, the coming eschatological age.

² The lineage of the Samaritans stems from the Assyrian conquest of the Northern Kingdom of Israel in the 8th century BCE. In typical ancient imperial fashion, the Assyrians deported the upper crust of Israelite society to other parts of their empire and, in turn, transplanted other peoples to occupy Israelite territory. These foreign immigrants intermarried with the Israelite poor left behind by the Assyrians and in the process, adopted much of traditional Israelite religion. The descendants of these people became the Samaritans.

To Jews in Jesus’s day, who believed that maintaining Jewish identity and (therefore) blood purity were vital, Samaritans were worse than foreigners. They were a mixed race, with a bastardised religion, complete with its own temple on Mt. Gerizim; they were a blight on the land. Most Jews wouldn’t even travel through Samaria for fear of being ‘tainted’.

However, in the Samaritans’ minds, they were the true remnant, the true people of God. They believed the religious system in Jerusalem was rife with corruption. The Jewish and Samaritan high priests regularly called curses down upon each other. Beyond that, Jews and Samaritans regularly antagonised each other, sometimes violently.

³ It’s interesting that Luke is the only gospel that includes this parable. Maybe that’s because the movement of the gospel past the boundaries of the Jewish world to engage the Gentile world is a major reason for the author writing Luke-Acts.