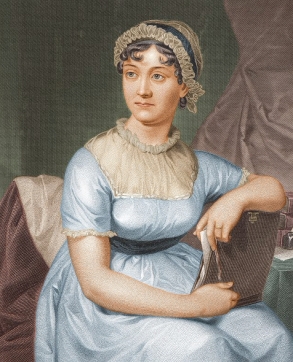 Jane Austen created some of the most memorable heroines to inhabit English literature. Elizabeth Bennet and Elinor Dashwood equaled (and often surpassed) the male characters in intelligence, inner strength and discernment. Yet although these protagonists defied common expectations and conventions, they were still inhibited by Austen’s Georgian society, which saw women as collectibles and potential financial assets for men to procure.

Has anything changed? We’ve certainly had our own share of incredible female characters, like Hermione Granger and Leia Organa. Of course, they didn’t get up to much – only outsmarting blood-thirsty dark wizards and leading galactic rebellions! It’s too bad, though, that life doesn’t always imitate art. In the world outside of novels and cinemas, statistics routinely highlight the significant pay gap between men and women in the same profession (a $35,000 difference in Australia, according to a recent report on ABC radio). Women continue to be under-represented in management, executive and leadership positions. And as if to add insult to injury, the events surrounding the recent U.S. election surely proved that we won’t be receiving an achievement award for our views of women any time soon.

James Brown was right: this is a man’s world. But just because it’s ‘the way things are’, it doesn’t follow that it’s the way they were intended to be.

The Kingdom that Empowers Women

The Kingdom of God that formed the crux of Jesus’ message utterly rejected the world’s power structures, elevating those in the lower echelons of society and embracing servant leadership. It shouldn’t surprise us, then, that women formed a vital part of Jesus’ group of disciples. One incident to shock his first followers occurred on a visit to the home of Mary and Martha. Martha remained in the outer room of the house (the woman’s ‘place’), preparing food for Jesus’ group. Mary, on the other hand, sat ‘at Jesus feet’ in the main room and listened to his words. She had taken the position of a rabbinic student – something deemed unacceptable for a woman by most people in that culture! Martha complained that Mary should have been helping her; she expected Jesus to follow social norms and send Mary back to the kitchen. Instead, Jesus turned expectations upside down and celebrated Mary’s choice. (It’s worth noting as well that a person who studied under a rabbi in this way generally expected to become a rabbi.)*

From the first, Christians followed Jesus’ example and formed communities that functioned as enclaves of the Kingdom, communities that subverted cultural hierarchies. Jews, Gentiles, slaves, Roman citizens, rich, poor, women and men joined in the same fellowships, where such social distinctions were meant to be ignored. So it’s not incredible when, in the New Testament, we meet Philip’s four single daughters, who are prophets. Or when we meet Priscilla, a prominent teacher in the early church. Or when we briefly meet Junia the apostle, along with several other esteemed women co-workers of Paul and leaders of the fledgling Jesus movement.

From all this, you’d think Christians would be the vanguard of the gender equity struggle. But are we?

The Spirit who Breaks Our ‘Rules’

Thankfully, in our day, many churches continue the pattern of the earliest believers, with women serving as apostles, teachers, administrators, prophets and leaders. In other churches, though, it’s left to the men to do the ‘heavy lifting’. Women, they say, are supposed to remain subservient to men and aren’t meant to lead or to instruct.

Why is this the case? I’d suggest (actually, many smarter people than me would suggest) that these Christians have lifted a few lines from Paul’s letters – particularly from I Corinthians 14:34-35 about women ‘remaining silent’ in church – in order to prove their point.# However, this has come at the expense of ignoring the Kingdom message and mindset that pervades the entire New Testament.

It also ignores the Spirit, who endows the Christian community with vibrant life and power. The Spirit, it turns out, doesn’t differentiate anywhere near as well as we do. God keeps doling out apostolic, pastoral and prophetic gifts on women and men alike, seemingly unaware that women aren’t supposed to use them. In fact, renowned theologians and scholars, from Gordon Fee to John Stott to Dallas Willard to Ben Witherington III, argue that this gifting, which pays no respect to gender, is the best evidence we have that women are designed and destined, even obligated to fill these roles.

Unfortunately, churches that preclude women from operating in such gifts (churches which, it must be said, are filled with honest, devout, loving and well-meaning people) cease to function fully as Kingdom outposts that present a redeemed view of women to society at large. They instead behave as time capsules, preserving an older version of the secular power constructs outside their walls.

Time to be Trend-Setters

And yet, hope remains! The opportunity is always before the people of God to get in stride with the Spirit. Churches are brimming with Elizabeths and Elinors and Leias and Hermiones. Let’s elevate them to their intended position and honour the gifts they have been given. It’s high time that we set the trend for the world and provided leadership in gender equality.

Like the Godfather of Soul himself said, this world ‘wouldn’t mean nothing without a woman or a girl.’

* I’m greatly indebted to Greg Forbes and Scott Harrower (Raised From Obscurity: A Narratival and Theological Study of the Characterization of Women in Luke-Acts, Pickwick, 2015) for their commentary on this particular story from Luke.

# Ample exegesis exists from cultural and textual perspectives that cast considerable doubt on at least our reading of this passage. Kenneth Bailey’s in Paul Through Middle Eastern Eyes is particularly instructive. Gordon Fee’s textual criticism of these verses (from his commentary on I Corinthians) makes for interesting reading. Suffice it to say, the ‘traditional’ interpretation of these verses seems utterly at odds with the Paul whose understanding of the Christian life is grounded in the ‘new creation’ and who worked tirelessly to erase divisions within the churches he served. We should remember that Paul wrote letters to put out specific fires in specific churches. Not everything he said was meant to be taken as dogma for every church, everywhere.